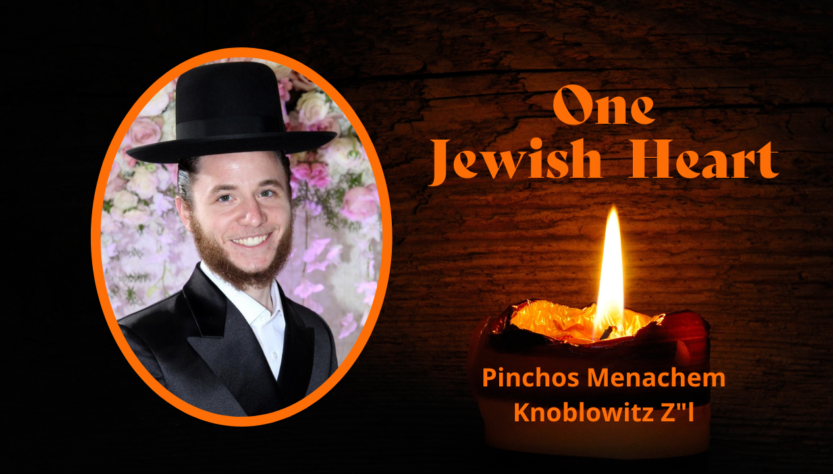 Throughout the world they sit on low chairs, wearing torn shirts, Mothers Fathers Brothers, Sisters with relatives around them. The voices of those who have come to share in the pain mingle with the phone ringing. A week like no other in recent history has passed.

All around the world, the families and all Yidden have been crying for the loss of so many young and vibrant bochurim, young children and men with seemingly long lives ahead of them. Young people celebrating with singing and dancing on the most auspicious day in the Jewish calendar at one of the holiest sites in Eretz Yisroel, Mount Meron, when the unfathomable happened.

We are a nation that, deep in our hearts, is one.  We may have our differences, but when everything is said and done, we beat the same drum.

Judaism is like a round cake sliced into portion sizes, each portion may be different, but it is still from one cake.

If we look at the list of those who perished in this terrible tragedy, there are people from all walks of charedi life, and to me, this was what was at the crux of what occurred. Just before the crush took place, 1,000s of people wearing all types of hats, kippas and shirts were holding hands together dancing singing with their eyes looking up to heaven in the purest joy.

Then woosh, it was over.

Or was it over?

As Jews, we believe there is a reason for everything that happens, we are not here to understand, but we try to accept.

Do we accept that there are lessons to be learned, or do we apportion blame on others, exempting ourselves from change?

I have been looking at social media this week, and some of what I saw made me cringe.

But thank Hashem, there were more positives than negatives.

I firmly believe that change can only come from each of us individually, and then we will belong to the whole that we are.

Each of us knows our failings, kindness, non-judgement, acceptance, appreciation; this list goes on. All we need to do is take this one little thing and work on it privately.  Can you imagine the difference this will make?

My Daughters nephew, who got engaged a few weeks ago in America, wanted to go to Meron to pray at Rabbi Shimon’s kever.  He was with his friend from birth; they danced and sang and were in a different world when they got caught up in the terrible, terrible events. The friend survived, But not Menachem.

Two young men on the cusp of life, whose lives changed in a blink of the eye.

As Menachem’s Kalloh, who met him precisely 30 days before this tragic day, cries together with her choson’s family and comes to terms with her heartache. As his cousins, aunts and uncles face their tears and anguish. As his siblings try and come to terms with their new reality. As his friend from birth who was with him rebuilds his life. As his Parents, Reb Dovid and Tova, try and keep their strength together for their family and themselves – Am Yisroel’s broken heart comes to terms with what happened.

How can we feel the uplift that I keep on talking about?  What’s the use of naming a magazine Uplift if we don’t impart an uplifting message?

Many – more extraordinary – people than I have said many words of wisdom.  My message is from a beautiful young child called Pinchas Menachem Knoblowitz zt’l, who I first met when he was five years old. His smile lit the room, and he had the sweetest temperament, which continued all the years.  He never wanted machlokes and would go the other way to avoid it. In his memory and that of all the kidoshim taken on lag Bomer, I hope that we too can stop machlokes and instead build bridges so that we can be a light on others.