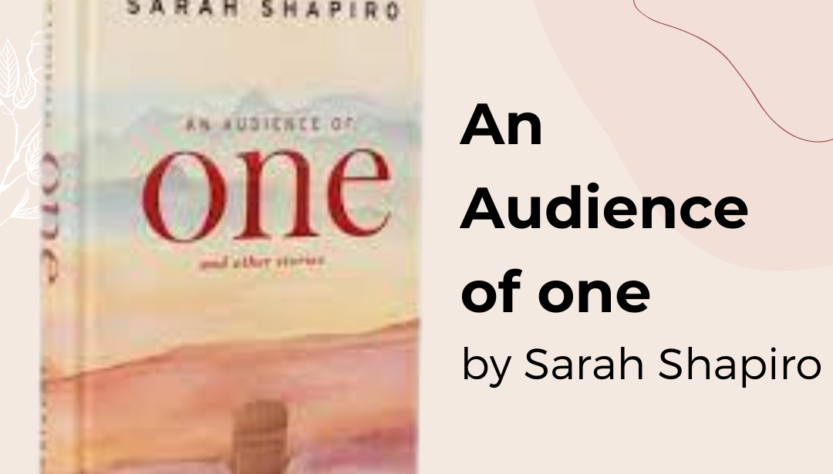 They say you can’t judge a book by its cover, but I was immediately drawn into Sarah Shapiro’s latest book by her ingenious title, An Audience of One. To me the words form a potent image of Hashem Himself clapping as I stand on the stage of life, reciting, acting and making the inevitable mistakes that living brings with it.

Sarah’s honesty about her own life experience is what her readers find irresistible. It is like sharing coffee with a friend who reads your mind, senses your pain and allows you into her inner world as proof of her understanding.

She draws the name for her collection of personal anecdotes from an interview with Rabbi Dovid Refson, born in Sunderland, UK, and now dean of Neve Yerushalayim, the world-famous Israeli college for women. His idea of playing to an audience of one seems grounded in the concept of speaking to each student as if they are the only one in the school. Could it still be a double entendre? For even while teaching each student, the subject matter is still Hashem Echad.

However you look at it, Sarah manages to pull the heartstrings of her own audience, giving rise to profound struggles and joys, questions of meaning and her own particular way of giving Hashem life along her personal journey.

As the daughter of the famous American, Norman Cousins—described in Wikipedia as an ‘American political journalist, author, professor and world peace advocate’— she was not automatically admitted into the inner circle of writers and influential people by rite of passage. She travelled a long and laborious road to achievement, fighting long and hard for understanding in her search for truth. She is as candid as she is real; as genuine as she is human.

A particularly touching story takes place on a visit to her sister in the States. Growing up together with a secular world view, her sister intuits only a small part of Sarah’s deep attachment to her life of Torah. The drought there causes Sarah to feel that prayer is the answer. She is a lone voice in the wilderness, but pray she does, and the outcome shocks her.

For those who remember her first and seminal book, Growing With My Children, this is a poignant sequel to those early years: a coming of age tinged with some of that same innocence and curiosity which makes her so endearing. This book is deeply coloured by the long arm of experience coupled with the ever stronger belief in the One who wrote and runs the greatest show on Earth.

In the telling, she allows us to draw on our own moments of truth which help fashion our belief that Hashem is our personal Audience of One.

This author does not have any more posts.